On Thursday 19 May, the same day that the minister of Mineral Resources and Energy laid out the department’s uninspiring budget for 2022/23, the National Energy Regulator of South Africa (Nersa) notified The Green Connection that it will oppose the NGO’s court application to review and set aside the decision to grant three electricity generation licenses to Karpowership SA. Nersa approved the Karpower licences in September 2021, despite the Department of Forestry, Fisheries and Environment’s (DFFE) refusal to grant environmental authorisation. The Regulator also ignored the massive public outcry, particularly from the small-scale fisher communities around Saldanha Bay Western Cape, Ngqura (Coega) Eastern Cape and Richards Bay KwaZulu-Natal, where these floating kettles will be moored. Fishers are mainly concerned about the irreparable harm that Karpowerships and other oil and gas projects could cause to marine life and ecosystems, which will affect their livelihoods.

According to The Green Connection’s Liziwe McDaid, “As Africa’s largest carbon emitter, the energy budget not only lacked the vision the country needs to address the climate crises, but it seems to oppose the President’s goals for a just transition. While we welcome the increased commitment to renewable energy, there are still too many projects that do not appear to be in the public interest, such as Karpowerships. Over the past year or so, several coastal communities around the country have expressed their dissatisfaction with oil and gas exploration. And the December 2021 court judgement against Shell found that it was wholly insufficient to merely consult traditional leaders. We must have proper, meaningful public participation with all who may be affected.”

The Green Connection has been involved with opposing Karpowerships since early-2021. First were the flawed environmental authorisation processes. Then the electricity generation licence application process, which Nersa still approved despite Karpower being refused an environmental authorisation. It was because of these flawed processes that The Green Connection filed its papers (on 25 April 2022) to review the Nersa generation licence. The organisation now waits for Nersa to provide all the records (Rule 53 Record) that justifies its decision to grant the licences. The deadline for Nersa to provide these records was 20 May 2022 but Nersa requested an extension. 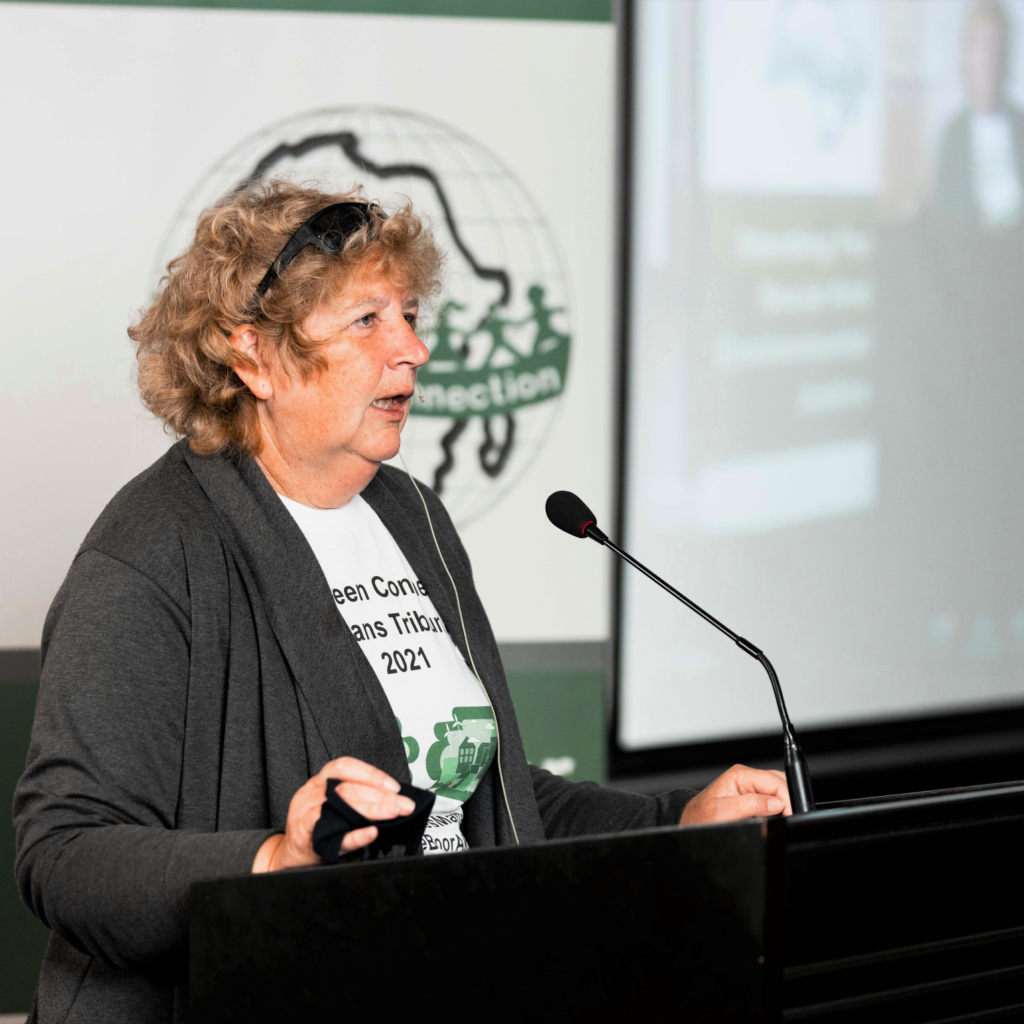 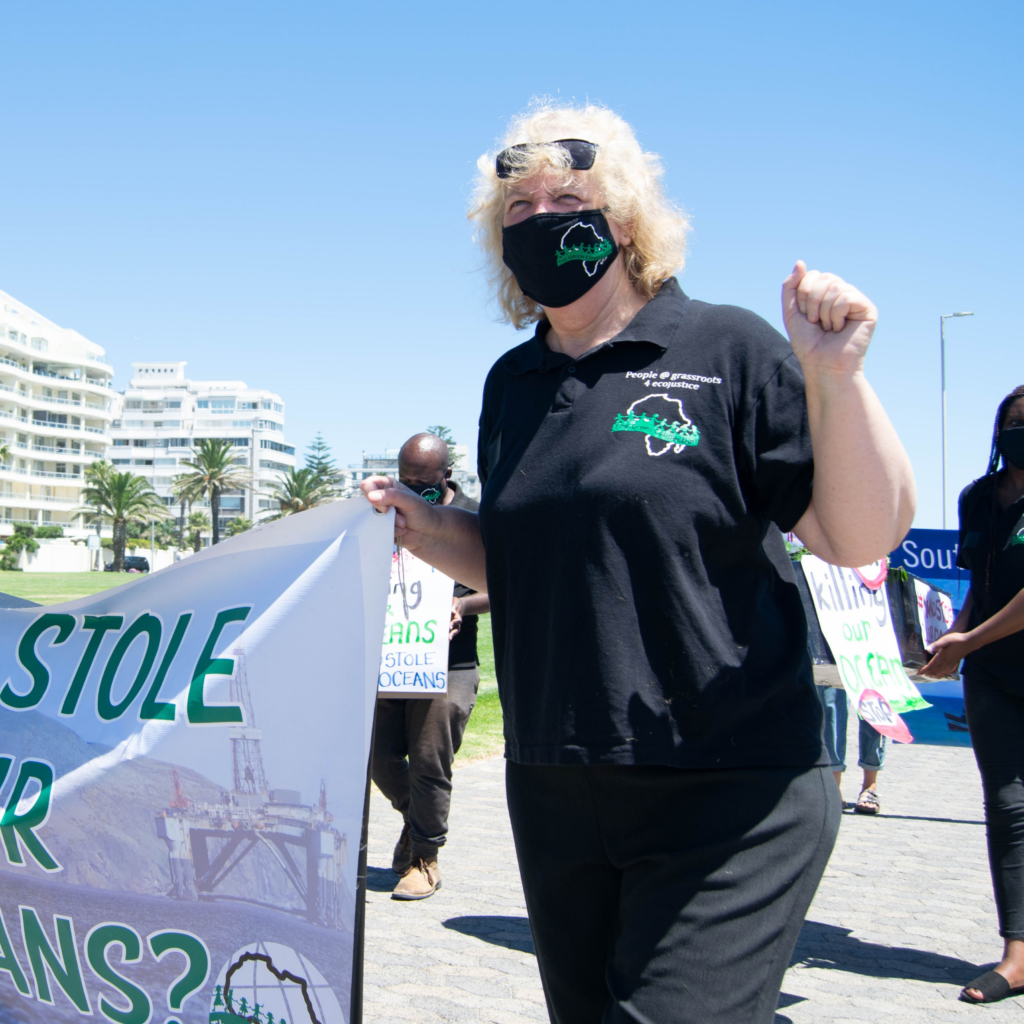 Liz McDaid (on the left) protesting at Sea Point, against offshore oil and gas, (on the right) talking about the importance of protecting the ocean at The Oceans Tribunal

She says, “Both the Department of Mineral Resources and Energy (DMRE) and Nersa are supposed to make decisions that are in the best public interest, which right now, should seek to address the energy crisis with a view to a just transition to renewable energy. The minister harps on about sector plans, like the Gas Plan and plans for nuclear but fails to provide any clarity about holistic and socially inclusive energy planning. When can the country expect to see the updated Integrated Resource Plan (IRP)? Instead of this piecemeal approach that, to date, appears set to undermine our climate commitments, what we need is a bolder vision for our future energy plans. We need a roadmap – specifically, the Integrated Energy Plan, as outlined in section 6 of the National Energy Act – to lead us out of the energy crisis we are in. But so far, we do not see the minister showing the necessary leadership to drive such a process, which would require meaningful input from all South Africans.”

McDaid adds, “South Africans are united in their frustration with load shedding. What we should see is more effort to address this, from the grassroots. For example, government could give small businesses and homes a tax break for putting up solar systems and it should also expedite the process to allow such generators to feed into the grid.”

The eco-justice organisation says that it continues to be concerned about the minister’s ongoing divisive comments about those who are anti-fossil fuels. With the country facing a climate emergency, it seems bizarre for a government minister to deride and oppose people’s efforts to combat climate change. In addition, the minister continues to push for the very fuels which will make things worse, and which will likely lead to more suffering for people on the ground.
The Green Connection’s Community Outreach Coordinator Neville van Rooy, “Is this now officially an onslaught from the government and industry, to bully communities and violate their rights to a healthy and clean environment? Even after two court interdicts that stopped seismic surveys – part of the initial phase to search for oil and gas – demonstrated the people’s opposition, the government is still forcefully pushing for these fossil fuels. In our view, communities want to phase out oil and gas and move to the just transition but, instead, more oil and gas projects are popping up, without proper meaningful community participation.”

“The DMRE’s agenda seems to ignore climate crises. The recent floods in KZN should be a clear warning that this is no longer a distant phenomenon. Climate change is at our doorstep, and we cannot afford to be stranded with fossil fuel decisions any longer. We have a right to choose the energy future we want for our country and the future we want is renewable. It would be un-African of us to just sit by and let government’s sluggish climate response potentially ruin the country’s chance for a just transition. Not only will we have to survive more floods and droughts, but our people are missing out on the many accessible socioeconomic opportunities that will come, as part of the transition, if it is done in partnership with the people,” says van Rooy.

On Friday 20 May 22, Eskom sent notice that it will not oppose The Green Connection’s application and will abide by the decision of the court.
The Green Connection notes Eskom’s decision to abide [by the court’s decision]. The eco-justice organisation’s Strategic Lead Liziwe McDaid says, “To the best of our knowledge Eskom has not signed the Power Purchase Agreement (PPA) with Karpower, which to us, indicates that Eskom may also have concerns about the impact of potential higher electricity prices, if Karpowerships goes ahead.”