Small-Scale Fishers Wave Goodbye to Searcher, But the Fight for Energy Justice Continues

Human Rights Month kicked off with a fresh new meaning for the small-scale fishing and indigenous communities on the West Coast, when the Western Cape High Court ruled that the ban against Searcher’s seismic blasting would remain because small-scale fishing communities on the West Coast – who would undoubtedly be affected – were not consulted. And since there are several unknowns, in terms of the potential for irreparable harm, the court opted for the ‘precautionary approach’ option and sent Searcher packing. The judgement was heard on Tuesday 1 March 2022. Tembeka Ngcukaitobi, instructed by the Legal Resources Centre (LRC), represented the applicants.

According to Justice Thulare, by its design the methodology used by Searcher and its environmental consultants SLR to assess impacts, excluded illiterate people and the poor. He added that it was worrying that they “did not deem the small-scale fishers along the West Coast as directly affected” by the seismic blasting. This lack of consultation with small-scale fishers and the failure to recognise that these activities would affect them and would influence their lives and livelihoods, was key to the court ruling.

The Green Connection’s Strategic Lead Liziwe McDaid says, “Hopefully, this is a lesson to anyone wanting to pursue offshore oil and gas projects that they must do their due diligence when it comes to identifying and consulting those who will be affected. Not only did these communities want to be involved in this process, but as people who will be impacted, they are supposed to be involved.” 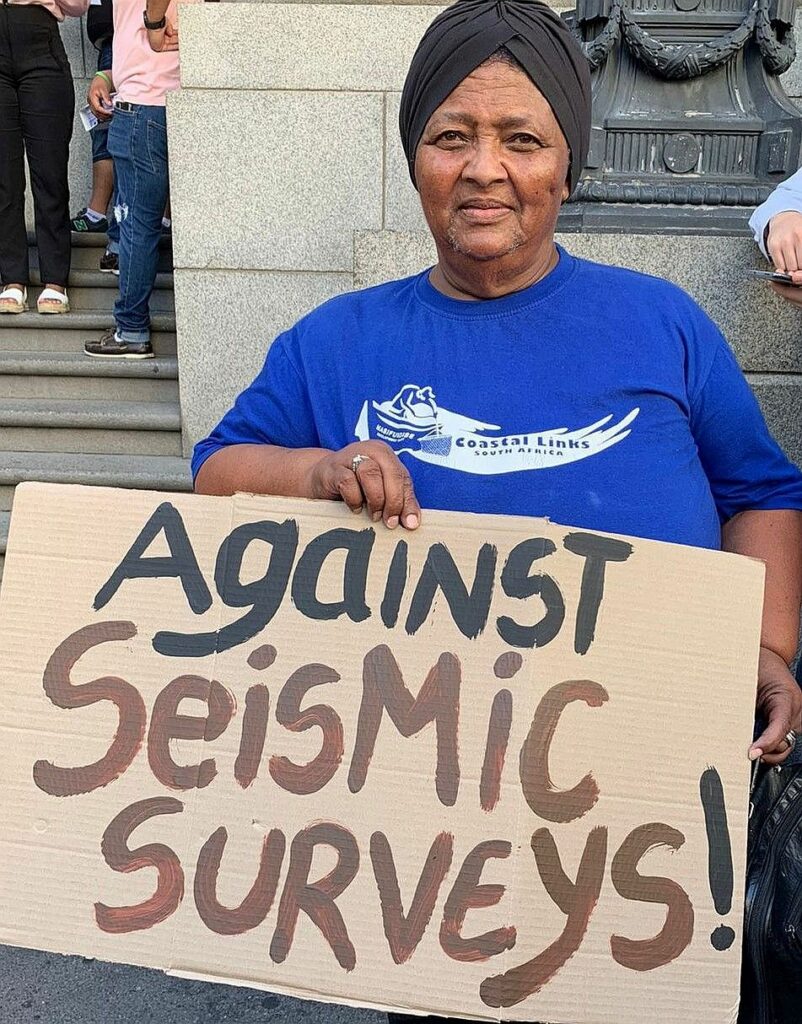 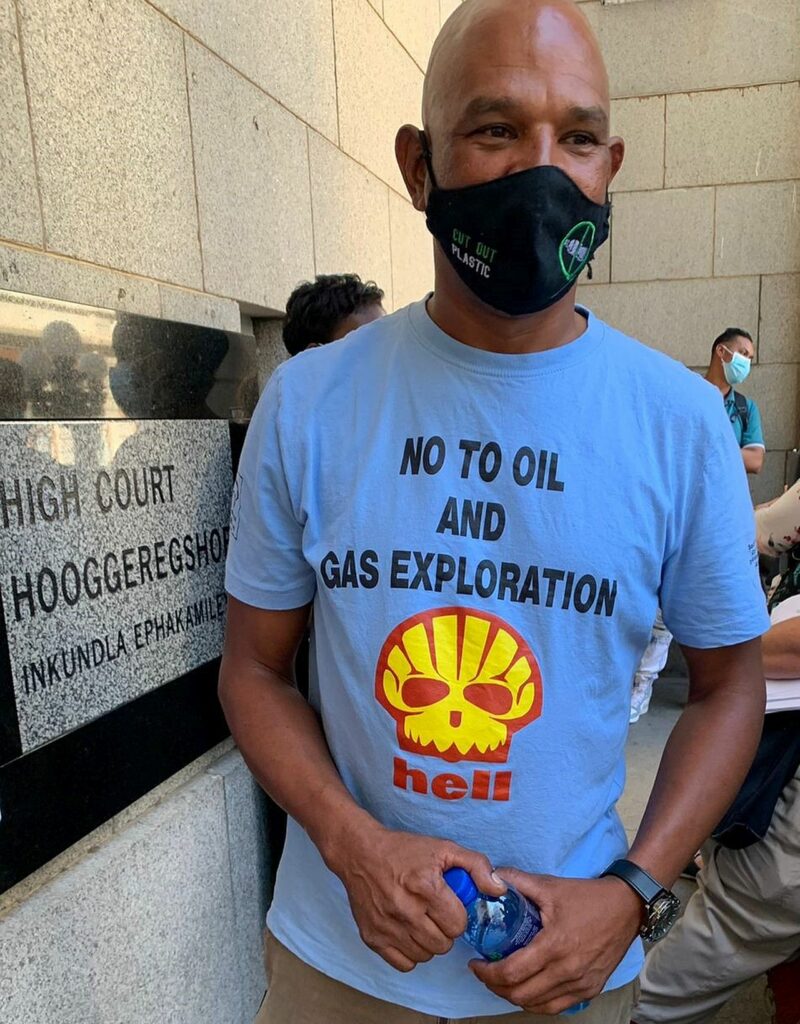 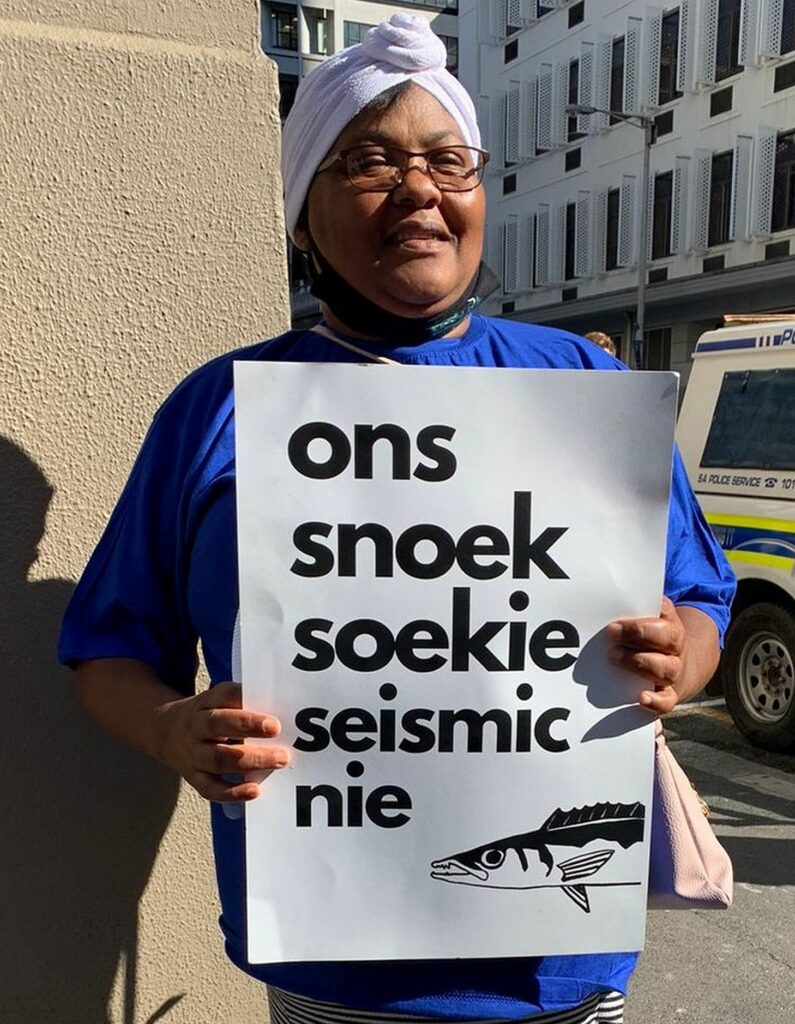 Small-scale fisher from Steenberg Cove in the West Coast and an applicant in the case, Christian Adams says, “If we had been involved, we would have rectified their assumption that small-scale fishers likely do not go further than 5.6km, instead they would have known that sometimes we go out further than 30km from coastline. Fortunately for us, the court saw right through their assumptions, and we were happy that the judge called them out on the lack of thoroughness in their environmental studies.”

According to The Green Connection’s Community Outreach Coordinator Neville van Rooy, “We felt fairly confident going into court, that the facts of the case would hold up and serve to protect small-scale fishers from further exploitation. The court could not ignore the evidence provided by the marine biology experts, which shows that the ongoing blasting activities would affect some marine species and their ability to survive and impact fisher livelihoods.”

Small-scale fisher woman from Langebaan Coastal Links (and an applicant in the case) Solene Smith says, “SLR made no attempt to meet with us. Therefore, it was not only a slap in the face of small-scale fishers and indigenous communities but, more importantly, the court also found it to be unlawful that Searcher only properly consulted with the commercial fishing sector.  However, since they did not make a concerted effort to reach the affected small-scale fishers – not through radio or newspapers or even through community meetings – it is clear that we are not seen as worthy of being consulted. The small-scale fishers of the West Coast are happy to see Searcher leave our ocean.”

According to the MPRDA, no work – that includes exploration, extracting or primary processing – can start without environmental authorisation from the competent authority (in this case, the Minister of the DMRE). The applicants were all therefore happy that Justice Thulare reiterated that the public consultation process – which in this case should have included local small-scale fishers – and its findings form “an integral part of the fairness” of Searcher’s reconnaissance permit application.

While Searcher’s EMP had very little information on popular fish species, hake and snoek, the court found that snoek breeding and feeding behaviours were at risk of disruption by the seismic blasting.

Smith says, “If Searcher and SLR had done their work properly, then we would have been involved and they would have known about all the risks to the environment and the impacts on the local people here. They would have known just how important snoek is to the small-scale fishers on the West Coast and they would have understood how harming this fish – which is central to our local economy and a cheap source of good nutrition for our people – would impact us and our livelihoods. We may not be rich, but we eat better than most, thanks to the abundance of snoek and hake in our waters.” 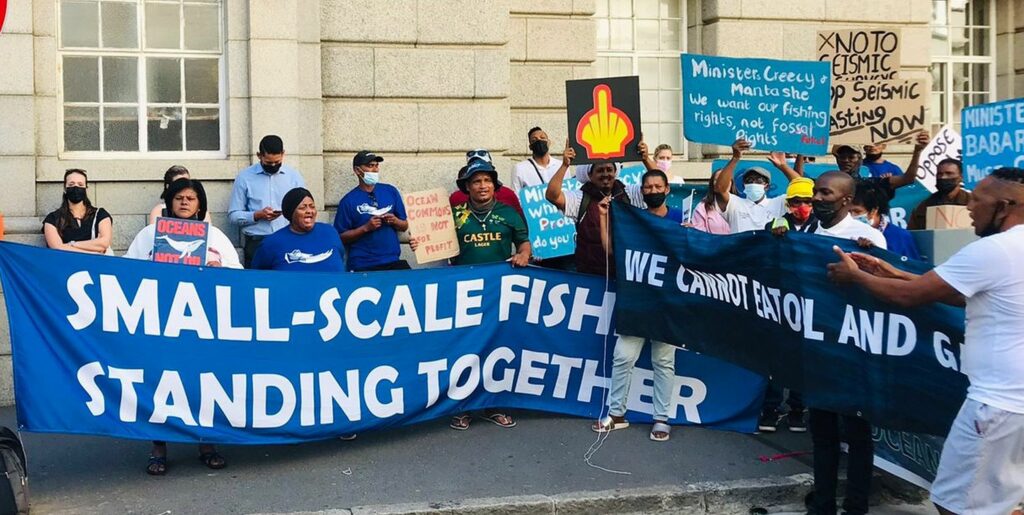 Since very little is known about seismic survey impacts on several other species and with the court recognising the “survival of the fishing industry is a matter of national importance”, the precautionary approach, which is often favoured, is another reason for the judgement. Furthermore, the judge also points out that Searcher’s EMP understanding of the local small-scale fishers was flawed, even though there was a wealth of recent data on the sector available, the company and its consultants did not use it.

Fisher woman and Chair of Coastal Links Saldanha (and an applicant) Carmelita Mostert says, “Since the seismic airguns are the problem, what mitigation is there to consider? Our livelihoods will be affected by the ongoing blowing up of our ocean. We really appreciate the judge for recognising that we are “equal before the law and have the right to equal protection and benefit of the law” by highlighting that Searcher had deliberately marginalised our poor communities, who would be affected by the seismic survey. He even mentioned the economic value of pickled and curried fish, which are a well-known part of the culture of indigenous-Malay coastal communities.”

Mostert adds, “In a country where indigenous communities are finally beginning to reclaim our lost identity, we must fight for the ocean because it means so much to us. If Searcher and SLR had treated us with dignity in the first place, then they would have been better prepared for the issues that were raised. But these companies did not see us as valuable contributors.” 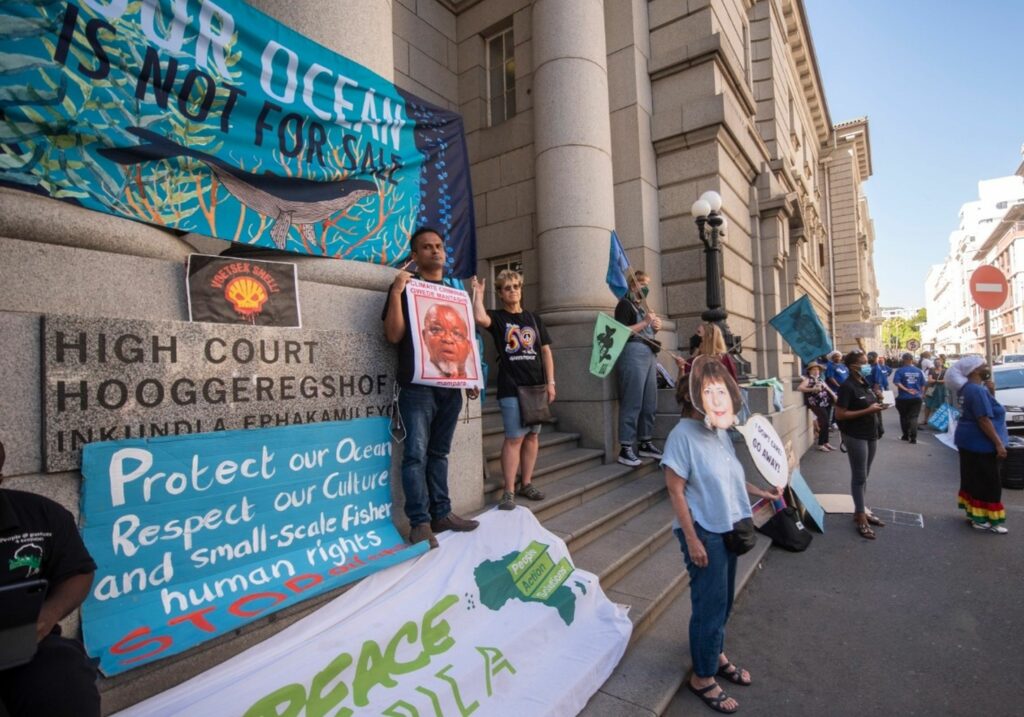 The court recognised that the small-scale fishers and The Green Connection were not asking for more than what is legally required, but rather that they want a holistic assessment of the various impacts (to environment, people, local economy, etc.) that may affect them and for consideration of these, as provided by the law. All they ask is that the judge uphold the rule of law. Nothing more. Nothing less.

Adams, who is also a member of the South African Small-Scale Fishers Collective (SASSFC) and Fishers United says, “More than just focus on irreparable harm of the ocean environment, the court also highlighted the irreparable harm to human dignity, should Searcher be allowed to continue without environmental authorisation or without having done an environmental impact assessment and a proper EMPr. So, it was good to hear the court acknowledge the rights of small-scale fishers, which would ultimately be infringed.”