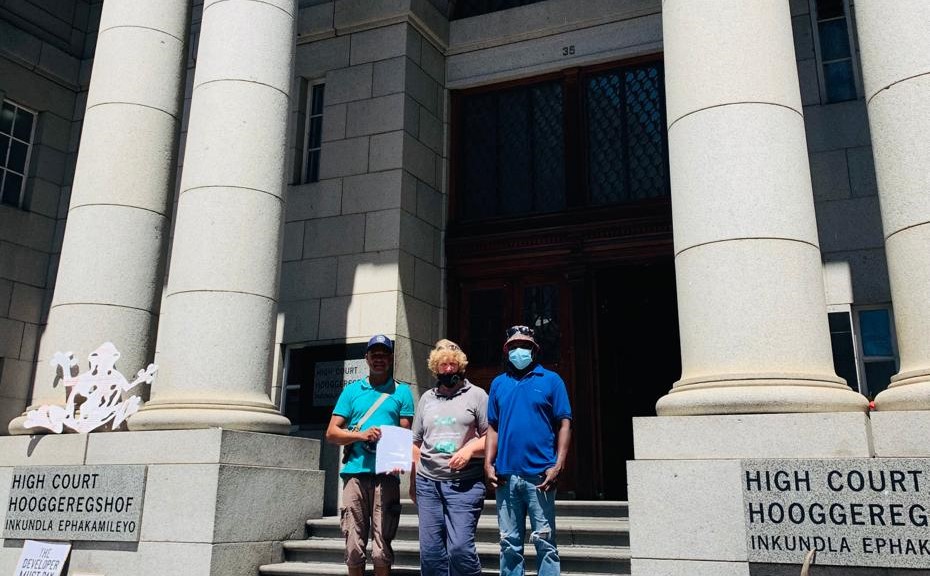 Civil Society Heads Back to Court, This Time to Stop Seismic Survey in West Coast

Today, less than a month after the successful court action that stopped Shell’s attempts at seismic surveys on the Wild Coast, in its search for oil and gas in South Africa’s oceans, small-scale fishers – with the support of The Green Connection – head back to court, this time to protect the West Coast. In its Confirming Affidavit against the Minister in the Department of Mineral Resources and Energy (DMRE), filed with the Western Cape High Court earlier today, The Green Connection makes official its support of these small-scale fishers who want to preserve their only source of livelihood from further proliferation of offshore oil and gas.

According to Liziwe McDaid Strategic Lead at The Green Connection – one of the community-driven environmental justice organisations involved in the overwhelming public outcry against Shell’s seismic surveys – Searcher Geodata UK Limited (Searcher) may have already started with its multiclient 2D and 3D seismic survey operations, which extends over a number of petroleum license blocks over the West and South-West coasts of the country.

“It is outrageous that, so soon after everything wrong with Shell’s application had been exposed, do we find ourselves in a very similar position where government and the oil and gas industry are willing to risk the livelihoods of small-scale fishers. However, this time it could affect coastal communities all the way from Hondeklipbaai in Northern Cape down past Langebaan and Saldanha Bay, on the West Coast. The sheer scope of these operations has been a key motivator for The Green Connection supporting the case as an applicant. These communities, many of whom are indigenous and who have been marginalised for too long, need support from all South Africans, to help them oppose unnecessary oil and gas drilling and protect not only their livelihoods, but their very way of life,” says McDaid.

According to one of the applicants Christian John Adams from Steenberg’s Cove in St Helena Bay – one of the small-scale fishers on the West Coast who signed and delivered the Founding Affidavit to the Western Cape High Court today – “We have come here today 21 January 2022 because we want to want to stop the seismic surveys that government has approved to happen here on the West Coast. We want to stop the blasting because of our cultural heritage and connection that we have with the ocean. By allowing this to happen, we will upset the ancestors and these operations will hinder our efforts to preserve our ocean for future generations.” Tembeka Ngcukaitobi will be representing the applicants in the High Court of the Republic of South Africa, Western Cape Division.

Searcher was granted a reconnaissance permit in terms of section 74 of the Mineral and Petroleum Resources Development Act 2002 (MPRDA) by the Petroleum Agency of South Africa (PASA) on 9 November 2021. However, the MPRDA requires that environmental authorisation – according to the requirements in the National Environmental Management Act 107 of 1998 (NEMA) – be granted by the Minister in the Department of Environment, Forestry, and Fisheries (DEFF) before a permit can be granted and before any related operations can begin.

McDaid says, “However, based on available information, Searcher has not applied for or been granted environmental authorisation under NEMA. As such, we believe that it should not be allowed to commence its seismic survey programme. Furthermore, we believe that it was unlawful to issue the reconnaissance permit without a NEMA environmental authorisation is unlawful, making any related operations unlawful as well.”

According to The Green Connection, that particular area has a very rich and productive ecosystem, which underpins much of the commercial fishing industry of SA. However, equally important is the integral role of this part of the ocean plays in sustaining the livelihoods of the small-scale fishers who live along this part of the coast.

“Hake and snoek are particularly important here,” she says. “Snoek, which is endemic to region and very popular with local consumers, plays an especially critical role in the livelihoods of most local fishers. However, according to expert reports, the behaviour of the snoek may be disrupted due to the seismic blasting, and may affect their feeding grounds and reproduction behaviours, which may affect the future survival of the fish.”

It is concerning, as an organisation that works in the eco-justice space, that the DFFE seems unable to keep our oceans and environment safe, especially in the face of the intensifying climate crisis. Why does it appear that what the DMRE wants trumps the rights of coastal communities, while the public’s wider environmental rights seem to be ignored? The Green Connection is guided and driven by two simple things, keeping our environment and oceans safe for all citizens to enjoy and to protect the right of small-scale fishers to create sustainable livelihoods from these natural resources, which belong to everyone who use it responsibly.

Carmelita Mostert SSF in Saldanha in the West Coast says, “We are opposed to oil and gas exploration and extraction from our oceans. We do not agree with Operation Phakisa and all the operations that go with it, such as the seismic surveys these companies want to do here. We depend on the ocean for our livelihoods and the activities associated with oil and gas places too much risk on our biggest and only source of income. By putting our ocean and marine ecosystems at risk from harm, takes the bread and butter out of our mouths.