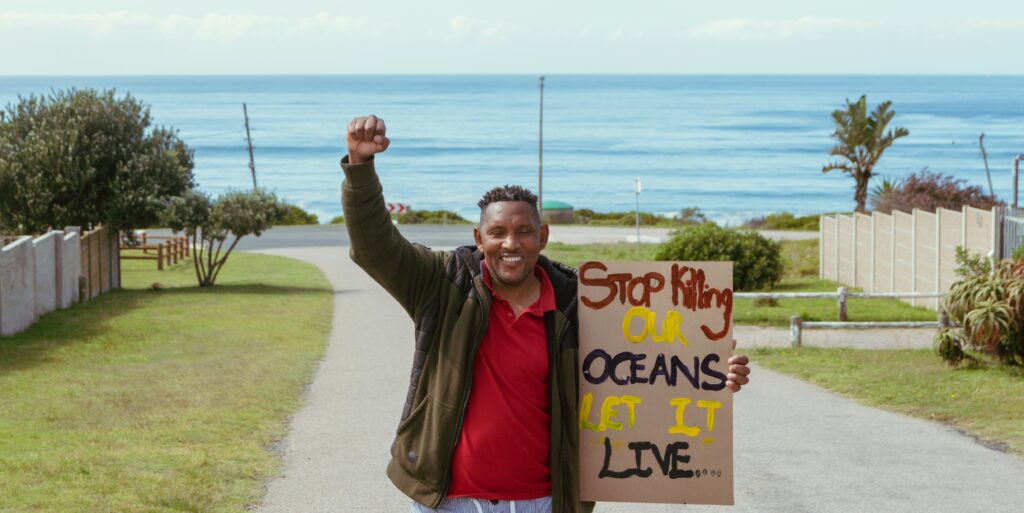 As the groundswell of opposition against Shell’s upcoming 3D seismic survey off the Transkei builds, the Green Connection – an ecojustice NGO that supports small-scale fishers in advocating for their livelihoods – reacted with astonishment to a press statement issued by the Department of Mineral Resources and Energy (DMRE) on 9 December 2021.

“What astounds us,” says Green Connection Strategic Lead, Liz McDaid, “is the nature of Minister Gwede Mantashe’s statements. While the Minister continues to promote oil and gas for economic growth, research conducted by the World Bank in 2020 – on 12 Sub-Saharan countries that discovered considerable oil and gas resources between 2002 and 2020 – revealed that in each of these countries the resources were overvalued, the timeline from discovery to production took longer than expected, and that government revenues were lower than predicted.”

“The most recent revenue projection is on average 63% lower than was initially estimated.  We also wonder why the government continues to push the country towards a climate change disaster by promoting a fossil fuel economy, instead of looking at greener energy options and the economic opportunities these present. We believe that oil and gas exploration and production is not in the public interest, and that the long-term, intergenerational damage it results in cannot be compensated for by short-term profits,” she says.

According to McDaid, “Mantashe claimed that there was no “conclusive evidence or scientific research globally that demonstrates that seismic surveys have caused irreparable harm to marine life, including mammals and fish.” However, in the second urgent application to interdict Shell from continuing its 3D seismic survey in the Transkei Exploration Area, testimony from various experts has been filed providing evidence of irreparable harm caused by seismic surveys.

She says that included in this testimony is a letter from South Africa’s leading marine experts, in which it is explained that “There is a growing body of evidence pointing to the immediate and long-term, and largely unmitigable, negative impacts (including irreparable harm) of this invasive method on marine creatures, from large (including acoustically sensitive whales and dolphins) to small (e.g. plankton, upon which all ocean trophic systems depend), that make up our valuable marine ecosystems, and upon which our coastal communities and economies depend.”

The Green Connection’s Community Outreach Coordinator Neville van Rooy – who joined the Amadiba Crisis Committee’s beach demonstration in the Wild Coast last Sunday – warns, “Juvenile loggerhead and leatherback turtles, which hatch on the northern beaches of KwaZulu-Natal, are swept down into the Agulhas current and will end up in the seismic survey area during February and March. These critically endangered animals, who already only have a 1-in-5 chance of survival, may not make it through the seismic survey area. Why is Shell allowed to conduct seismic testing during such a sensitive period for turtles, who are migrating from their hatching spots into the Agulhas current?”

According to testimony provided by marine science experts, Dr J Harris, Dr J. Olbers and Dr K Wright and filed in support of the second urgent interdict application relating to Shell, turtle hatchlings from the nesting beaches of the iSimangaliso Marine Protected Area are carried by the Agulhas current through the seismic survey area. These turtle hatchlings do not have the ability to avoid the airgun arrays, will not be detected by observers, and suffer extreme distress.  The seismic survey should thus certainly not continue during February and March.

The Green Connection fully supports the legal action brought by several environmental and community groups along the Wild Coast, who seek an urgent interdict against Shell to stop the 3D seismic survey. The case is scheduled to be heard on Friday 17 December 2021 (postponed from 14 December). In addition, more than 300 000 people have signed Ocean not Oil’s petition supporting the call to stop the seismic surveys. All these actions show that many South Africans are opposed to oil and gas exploration.

In addition to the Shell seismic survey in the Transkei Exploration Area, a reconnaissance permit application has been submitted by seismic survey company CGG for permission to conduct a multiclient 3D seismic survey over several exploration blocks located off the southeast coast of South Africa, ranging Gqeberha to a point approximately 120 km southeast of Plettenberg Bay (the Algoa, Gamtoos and Outeniqua Basins).

In submissions made by the Green Connection in relation to this application, two legal points were raised that the Green Connection believes should result in the DMRE refusing to grant the reconnaissance permit to CGG.  Firstly, the Mineral and Petroleum Resources Development Act (‘Petroleum Act’) does not empower the Petroleum Agency of South Africa to accept a reconnaissance permit application for blocks where other companies hold exploration rights. And while the draft environmental management plan (EMP) states that CGG is in the process of obtaining written consent from the original exploration rights holders, the law does not allow for this either.

In addition to these legal points, the Green Connection made submissions asserting that the proposed 3D seismic survey – during which airguns with effective sound levels in excess of 260 decibels are fired as often as every 10 seconds, 24-hours a day for the duration of the survey – will result in unacceptable ecological degradation and environmental harm. Such unacceptable harm includes direct physical injury to marine species in relatively close proximity to the airgun arrays (resulting in mortality and injuries leading to mortality), as well as immediate and long-term harm to marine species at much greater distances (such as sublethal injuries, interference with marine mammal communications, disruption of the use of reefs by fish, behavioural changes).

“On our reading of the Petroleum Act, a reconnaissance permit should not be granted if the reconnaissance will result in unacceptable pollution, ecological degradation or damage to the environment. However, if we consider the latest available research, we believe that ‘unacceptable ecological degradation and environmental harm’ will result from these seismic surveys.”

The Green Connection also made submissions regarding inadequacies in the public participation process. While CGG’s consultants allowed the minimum requisite 30 days for the public to submit comments, the draft environmental management plan and specialist reports are highly technical, and most of the fishing communities and affected groups that the Green Connection works with have not heard of the reconnaissance permit application.

“With so little time to comment, it is unlikely that affected communities were able to provide any meaningful comment. And while the Petroleum Act makes provision for administrative appeals to be lodged against permitting decisions, the Act does not automatically suspend the granted permit. With seismic blasting planned to commence as early as January 2022, CGG’s seismic survey could commence (and may even be completed) before the appeal process has run its course, and certainly before any subsequent High Court review of any appeal decision is heard. This makes the appeal mechanism an ineffective remedy,” adds van Rooy.

Barend Fredericks of the Bigai Community Small-Scale Fishers says their community were definitely not consulted. “We are categorically opposed to any seismic activities in our coastal waters. The seismic blasting not only kills marine life near the seismic gun arrays, but also impacts fish navigating systems and their migration habits, which will negatively impact our catches come harvest time.”

Barend adds, “We will continually fight, negotiate and protest against all kind of exploitation along our coasts and beaches! As indigenous South African citizens, we have a cultural right to make a living as hunter-gatherers, as our ancestors have done for thousands of years. And we will not allow profit-hungry corporate giants to take away our rights by destroying our oceans. The government should look at renewable energy sources to not only supply sustainable energy for the people, but also to create sustainable employment.”

Side note: In the run up to the court hearings (to the second interdict aimed at halting Shell’s seismic survery, communities in Knysna, as well as members of Coastal Links Eastern Cape, held beach protests to draw attention to their concerns, while in Beaufort West the community gathered at the Leeu Gamka Shell Ultra Fuel Station. A number of other protests also took place at Shell Garages around the country.