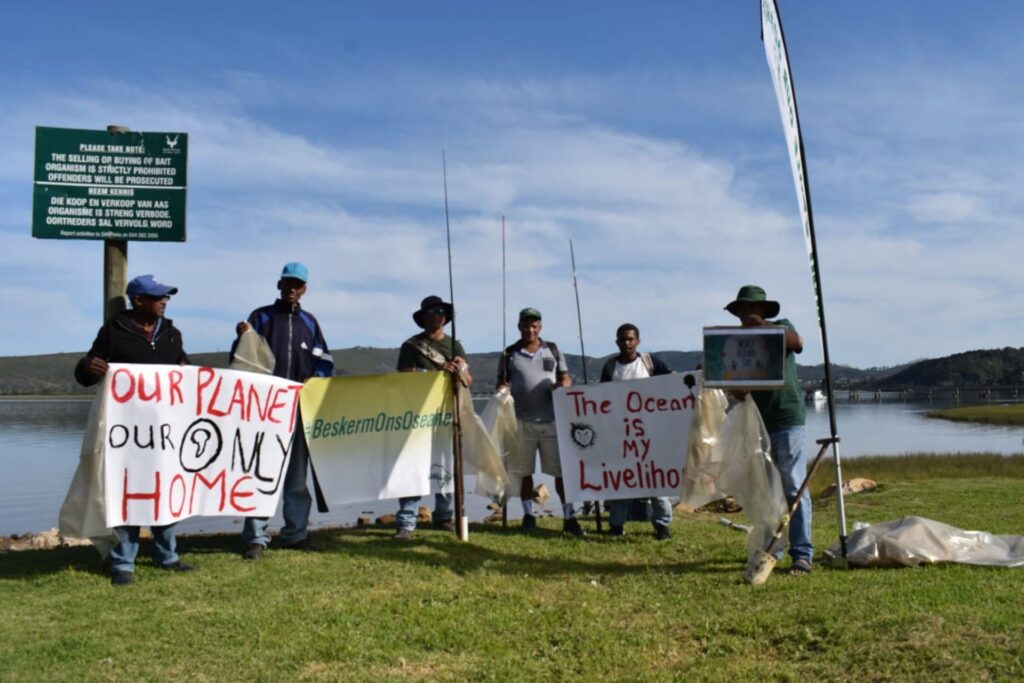 Bigai Fishing Community Continue To Be Deprived of Their Fishing Rights!

The struggle continues for small-scale fishers in Knysna as they constantly push back government regulations and by-laws restricting their access to the ocean via ‘privately owned property’ and denying them internationally recognised rights to harvest marine resources.

They are harassed, criminalised, and publicly humiliated by government authorities. They constantly have to put up with being stripped off their clothes for body searches or by being maliciously arrested for practicing their generational fishing rights. These human rights violations persist despite several engagements with the municipal management officials and the mayor (the recent one took place on 4 June 2021) calling on the authorities to desist from perpetrating these human rights violations.

“Being denied our fishing rights is a major problem for our community. We have been restricted from catching fish where there are private properties, yet these are our fishing spots,” says Barend Fredericks, a Green Connection Legacy champion and a fisher folk from Knsyna Bigai community.

According to Fredericks, pollution of the lagoon has caused the death of marine resources and depletion of fish stocks in the area, causing hardship to local communities whose livelihoods depends on the ocean. Local fisher folk also fear for their safety as there are unleashed dogs roaming around the area, in the name of protecting ‘private property’ along the beach.

“Even our children’s fishing equipment gets confiscated when they have no license to fish [to produce on demand],” he adds

They are also concerned about the negative impact of the proposed government’s Operation Phakisa plans to exploit offshore oil and gas in places close to Knysna or the move to introduce 20-year long contracts for Karpowerships to generate electricity in the ports of Saldanha, Ngqurha and Richard’s Bay.

In addition to pollution, powerboats cause vibrations and loud noise on the lagoon, especially during holidays, which means that fish and bait are no longer available in the unrestricted areas of the Lagoon.

Additionally, these small-scale fishers want to benefit from the community fund set up by SANParks to empower fishing communities and improve their livelihoods in the form of a R100-million development fund announced by then Minister Zokwana in 2018 to help small-scale fishers. Up to now, local fishers have not benefited from the funding.

Fredericks says fisheries policies do not align with subsistence fishers’ needs, as “fishers must be able to fish in private property as that is where most fish are, since there are several factors influencing the availability of fish in the area.

“Now that we have cast our votes, we need to urge the local councillors to reinstate our cultural and customary fishing rights, and to stop the criminalization of our children. But, most importantly, marginalized communities must be included in decision-making about their environment,” says Fredericks.

As freshly graduated participant in the Green Connection Legacy Programme, Fredericks continues to praise the training that he received as an important tool in his fight for human rights. He says it gave him the knowledge and skills on how to communicate with role players and how to make a clear argument to help stop harmful policies.