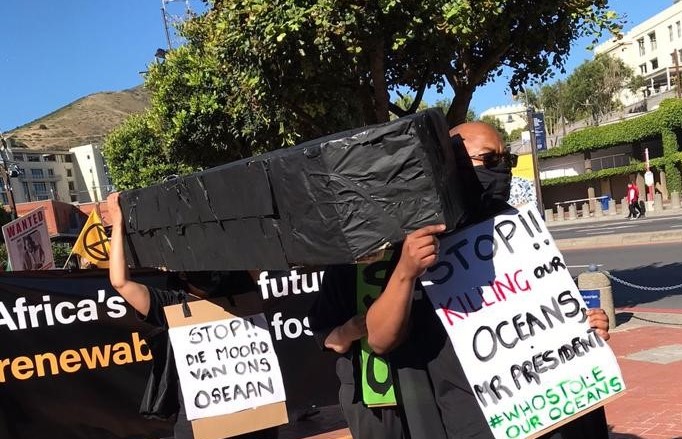 This week (10 November 2021), we joined other environmental defenders in Cape Town to peacefully demonstrate outside the African Energy Week #AEW2021 conference venue demanding an end to fossil fuels and the immediate pivot toward the just transition to a renewable energy future.

With a mock funeral procession in the V&A Waterfont, The Green Connection’s Nandipha Masango says, “We are mourning the death of our oceans, as fossil fools continue investing in polluting, expensive and unreliable energy sources. While they say they are taking climate action, at the same time they are also the ones who are pushing climate change-inducing projects. It is time that the Department of Mineral Resources and Environment (DMRE) listens to the people and start investing, more intentionally, in real and sustainable solutions, for a better future and environment.”

The Green Connection’s Liziwe McDaid says, “While South Africa will receive a whopping R131 billion rand to help meet its climate targets, recently announced by climate leaders at the United Nations COP26 summit, it is hard to imagine how this might work, when considering that are decision-makers are still driving fossil fuel exploration and extraction. As the world’s 12th biggest emitter of climate-warming gases, heavily reliant on ageing coal-fired power stations for its electricity, South Africa must spend these funds for what it is intended.” It is hard to believe a President who tells you they want green finance to make Eskom and the electricity sector less carbon intensive, while still allowing his energy minister to rampantly promote fossil fuel exploration and the construction of new fossil fuel electricity generation facilities.”

McDaid says South Africans must take note of what is happening in the energy space. Far too many of our government’s proposals will only exacerbate the climate crises and will negatively affect the livelihoods of many citizens, especially the small-scale fishers in our country. The current Karpowerships debacle, for example, where a so-called emergency energy solution could be anchored off our shores for 20 years – which will likely impact the marine life – is another example how this is not in the national interest. The process also continues to be plagued by allegations of corruption and abuse of due process.

If the COP26 deal is for real, then together with investing it in green electrification, South Africa should ban all new fossil fuel exploration. Without such a moratorium, whatever savings are made on the Eskom side will simply go up in carbon-intensive smoke in terms of the climate additions that will be made through the oil and gas exploration.

McDaid says that The Green Connection’s message to the leaders at COP26 is: “We want to believe you, but we it is very difficult because while you are taking money in the name of climate change mitigation with one hand and taking money from the same or similar people to destroy and add to climate change with the other.”

Furthermore, The Green Connection notes with interest, Minister Godongwana’s comments that South Africa’s climate change mitigation commitments are bold and are optimistic when the Minister says, “If we invest in the correct infrastructure for the future, we will be able to take advantage of opportunities to increase our trade with other countries.” However, while we welcome the Minister’s priorities in terms of his focus on a transition to renewables, we hope that this signals that government has seen the unacceptable risks of any further commitment to oil and gas and that sense will prevail.