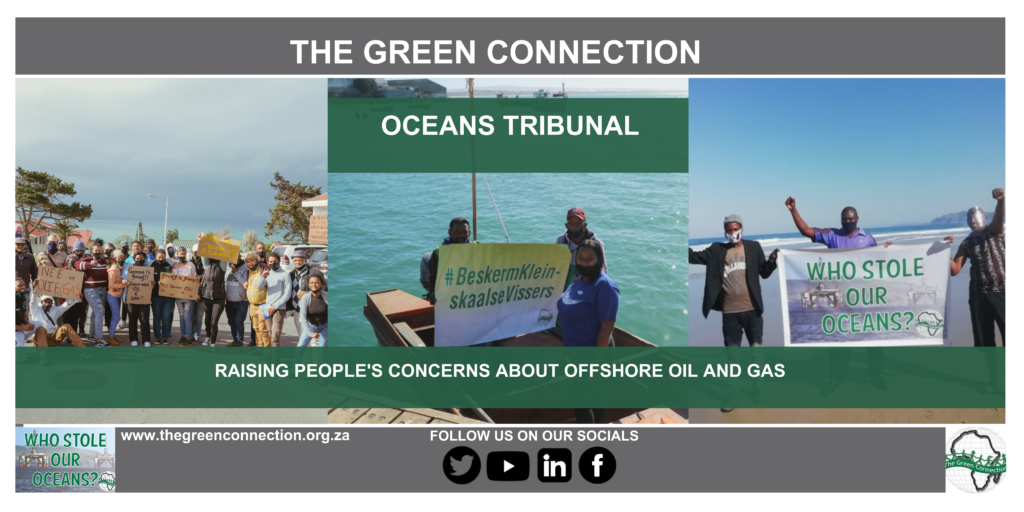 The Green Connection’s (GC) first ever Oceans Tribunal – which took place on 21-22 September 2021 – was marked by heart-wrenching stories and presentations from small-scale fishers and other communities whose livelihoods are being destroyed by extractive industries. Part of its ‘Who Stole Our Oceans’ campaign, the Tribunal – attended by more than 200 people – aims to highlight the daily struggles of those communities whose voices are ignored by government, big business, and the oil and gas industry.

The Green Connection’s Strategic Lead Liziwe McDaid says, “What the Oceans Tribunal revealed, in no uncertain terms, was that South Africa’s small-scale fishers are under serious threat, driven by national ‘development’ agendas and international corporations. In fact, government’s drive on oil and gas increasingly raises similar concerns as those exposed in the unlawful nuclear deal (that was stopped by civil society in 2017), where our decision-makers are choosing options that only benefit a few, at the expense of thousands of families living along our coast. The latest approvals for power ships in three of our ports, is especially concerning.”

McDaid says she is eager to see the final recommendations from the experts – including Nnimmo Bassey (Nigeria), Professor Loretta Feris, Allison Tilley, and Jesu Rethinam Christy (India). This eminent panel of “jurors” will reflect on the testimonies they heard from communities, and the expert knowledge shared through written reports and the inputs of the specialist panel on Day 1 of the jury. The ‘verdict’ will then be shared with President Ramaphosa and the Climate Commission so that they can “wake up to the climate and human rights emergency and open the spaces and create the platforms for meaningful engagement with communities, who must be recognised as meaningful stakeholders of the ocean, and in the just transition. Overall, the international insights – from Mozambique, Nigeria, and India – have strengthened our resolve to keep fighting for the rights of small-scale fishing communities.

On the first day, panellist Patrick Bond gave an overview the extractive oil and gas industry which was echoed and expanded on with insights from India. Mr MJ Vijayan Senior Advisor to the National Fish Workers Forum in India echoed the sentiments of his fellow expert panellists, “This is both blue colonialism as well as blue imperialism, merged into one. And let us not doubt this, the imperialist militarisation elements of this are very very high. Especially in the South African context, but all over the world, this is the new blue apartheid. I mean, creating an institutional framework to justify the murderous eviction of fish workers from their life and livelihood. Let us not mince our words about it but rather openly speak out against it.”

Another expert panellist Bernadette Muthien says, “Why, in a country that has so much and with some of the best laws in the world, are most of us still so poor? Why, if women and girls are in the majority, are women still so poor and still so brutally violated? Given the unholy alliance between capitalism, economic exploitation and patriarchy, women and girls will starve in the midst of plenty. In the Western Cape, for example, we have two oceans full of seafood and vast lands full of nutritious food, but none of this is for our benefit. We need to bring women back to the centre of our societies. They should be consulted and allowed to take charge of decisions, for the good for their entire communities.”

Other panellists, such as legal expert Wilmien Wicomb focused on the importance of indigenous rights. Masifundise Development Trust has been working with small-scale fishers for more than twenty (20) years, also joined the discussions on Day 1. The civil society organisation points out that when oil and gas licences are allocated, it usually infringes on traditional fishing grounds and the rights of small-scale fishers. The result is that this has turned many of small-scale fishers into criminals because they are not allowed to go to those places where their ancestors would traditionally fish.

In her opening remarks, Jury Panel member Allison Tilley, part of the information regulator and an attorney specialising in transparency and accountability issues says, “Transparency in respect to environmental issues is crucial. One of the main things that we have learnt from communities’ struggles in South Africa is that access to information and transparency are some of the key weapons that we must fight both corruption and the incorrect use of resources. People need access to information to access other rights. What we have seen at the Information Regulator, is a significant number of requests coming through for information around environmental safety, which I trust will change. Another major problem is our government’s blind reliance on bad science.”

Other experts also considered the overarching blue economy, as yet another extractive destruction of nature, which appears to ignore not only local fishing knowledge and but also established rights of coastal communities.

Small-scale fisher and other communities affected by oil and gas drilling and exploration made presentations:

Natalie van Wyk of Coastal Links Saldanha Bay Community says that she is concerned that the pending arrival of the Karpowerships spell disaster for the community. She says, “Currently we are facing the Karpowerships which are planning to invade our oceans near our coastline. The presence of these ships will scare away the marine life and the fish stocks that our local fishers depend on to stay alive.” Natalie paid tribute to the Legacy Programme, an initiative by the Green Connection to empower local communities to understand what’s happening and to fight for their rights with the proper tools and guidance.”

Sasekani Khoza an environmentalist from Orlando East in Soweto told the Tribunal about his initiative to create awareness against illegal dumping, pollution, and degradation in his community. “The Legacy Programme has taught us about the harmful effects of the burning of fossil fuels and in particular the release of harmful gases in the production of plastic. Plastic products are one of the major pollutants in my community and through the Legacy Programme we have been able to teach our community about alternatives to dumping, such as recycling and using alternative products to plastic.”

Tatum Manuel of Coastal Links Langebaan said her community was united in its fight against the Karpowerships. “We will not rest until they sail back to where they come from. And we call on banks like ABSA not to fund the Karpowership project as our very lives depend on the health of the oceans, which the Karpowerships will destroy. Fishing in our communities is often the only source of income for people. However, there is hope for the future, and it lies in renewable energy.”

Vuyiseka Mani from Gqeberha, representing the Eastern Cape Environmental Network (ECEN) said her community was plagued by a high rate of unemployment and unemployability. “Unemployment is rife across all sectors of the community, old, young, male and female. Those that are unemployable are youngsters with matric and varsity degrees who lack the experience required by the private sector to get jobs. As a result, we look to the ocean for our livelihood as fishers, fisher cleaners and fisher packers and sellers. Being a tour-guide is also an option. In view of this deplorable situation, it does not take a genius to see how the destruction of the ocean will lead to increased misery and wholesale community disintegration.”

Vuyiseka said it was a myth that the oil and gas industry would provide long-term jobs for the community. She says, “The structures required, need highly qualified people, which our communities do not have. So, they will use our people to dig the trenches and make the tea and coffee, which is not sustainable.”

Danny Davidson from Nieu-Bethesda in the Karoo, dealt with the negative impact of fracking in the region. “Fracking has negative consequences on various aspects of our livelihoods. The so-called job creation politicians talk about is temporary and does not apply to skilled positions. The impact on the environment will not only pollute our ground water and destroy indigenous flora and fauna, but it will have a severe impact on tourism which is a sector which provides jobs for our community.

Our subsistence farmers in the area will also suffer from the pollution of the land. The companies who do the Fracking, come in, destroy the land for profit and leave the country and land destroyed.”

These sentiments were echoed by other community representatives and partner organisations that gave testimony from the Northern Cape to KZN.

After hearing the community testimonies, the jury panel provided some reflections on what they had heard:

Professor Loretta Feris (member of the jury panel) says, “The loss of livelihoods, due to multinationals operating in the fishing industry, is already happening, and people have a right to be afraid. More oil and gas projects, including Karpowerships, will only make this worse. We should also consider the implications for associated industries that rely on the ocean, including tourism, thus affecting more people and more livelihoods. Environmental impacts reduce rights are even further. Pollution and emissions impact on climate change, subsequently warming the ocean What will this do to fish stocks and other marine resources? By promoting the oil and gas industries, traditional fishing rights will be completely eroded, maybe, even erased. These are people with a real sense of connection with the ocean, as part of their heritage. This legal issue should be considered.”

Director of the Health of Mother Earth Foundation Nnimmo Bassey (also on the Jury Panel) joined from Nigeria. He says, “Fisher folk and all those concerned with the health of our oceans, as well as those who are helping to stem the tide of global warming, are the true defenders of our cultures and our livelihoods. However, I am particularly worried by the position of some of our politicians, who see the oceans as limitless and who believe that nothing can harm the ocean. They believe that they can use the ocean as a dumping ground, while at the same time draining all its resources. But we are seeing the harm from extractive industries and oil companies, and from the level of human rights abuses against artisanal fisher folks who attempt to make a living from the gifts of nature. We must stand very firmly against the abuse of our people and the environment.”