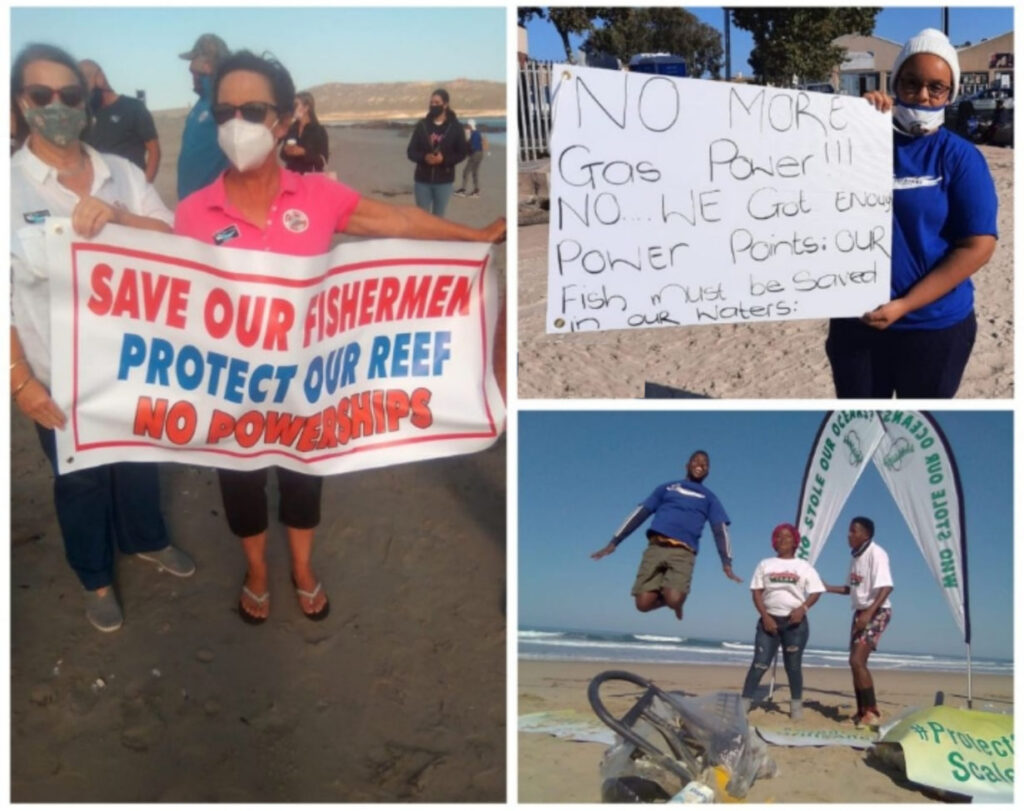 Today (19 August 2021), The Green Connection and others make their oral presentations at the National Energy Regulator of South Africa’s (Nersa) public hearings regarding the Karpowership SA electricity generation application. According to the environmental justice organisation’s Strategic Lead Liziwe McDaid, “While the Green Connection is on record for objecting to the floating power plants as a power generating solution – due its potentially devastating impact on the marine environment and also on the livelihoods of local coastal communities – we believe this electricity generation licence process is also fatally flawed.”

McDaid says, “Our submission highlights that information was redacted in the application process and is therefore incomplete. This is disturbing. Why the secrecy? Where is the transparency? What are these redactions hiding? Our concern is that South Africans may be in for a massive shock and end up paying even higher electricity prices. The contract proposed with Karpowership SA is particularly alarming, since it could supposedly last for two decades. Twenty years can hardly be seen as an ‘emergency’ energy solution.”

The Green Connection’s submission includes an extensive list of critical issues that have been redacted, clearly demonstrating procedural unfairness. This includes a summary of the Power Purchase Agreement (PPA) and any version of the PPA. Particulars of contractual arrangements with Karpowership SA and its financial information, including projections in respect of the proposed undertaking, were also redacted.

McDaid says, “These redactions unlawfully restrict and frustrate the ability of Interested and Affected Parties (I&APs) to analyse these aspects of the application and obtain expert input. It becomes an obstacle for concerned citizens who want to submit their views to Nersa, based on facts and information relevant to the generation license application.”

The implications of Eskom having to sign a long-term (20-year) PPA, coupled with the implications of Nersa granting such a long-term generation license are two of the major sticking points with the Karpowership SA proposal. According to McDaid, it has been reported in the press that longer contracts are riskier for Eskom, especially when electricity is generated by burning fossil fuel. With Karpowership SA, the tariff for electricity will be almost three times higher (1.69 R/kWh) than the most recent solar and wind projects that were contracted by Eskom during the last renewable energy bid window (0.62 R/kWh). This low represents the benchmark for least-cost new electricity generation capacity.

She says, “While renewables offer largely predictable tariffs, on the other-hand fuel-based projects shift the risk to Eskom. This is because fuel is treated as a “pass through” cost meaning that Eskom is potentially exposed to both fluctuating fuel prices and the Rand-Dollar exchange rate. This means, if the price of fuel goes up, Eskom (and the consumer) pays more. The electricity generation landscape is likely to change significantly over the next 20 years, and a two-decade lock-in represents a significant risk to Eskom and the country’s economy.”

For more information about the Who Stole Our Oceans campaign opposing oil and gas exploration on South Africa’s coast to protect the ocean for our future, follow us on the socials: Facebook and Twitter

The hearings were aired live at @NERSA_ZA on Twitter.