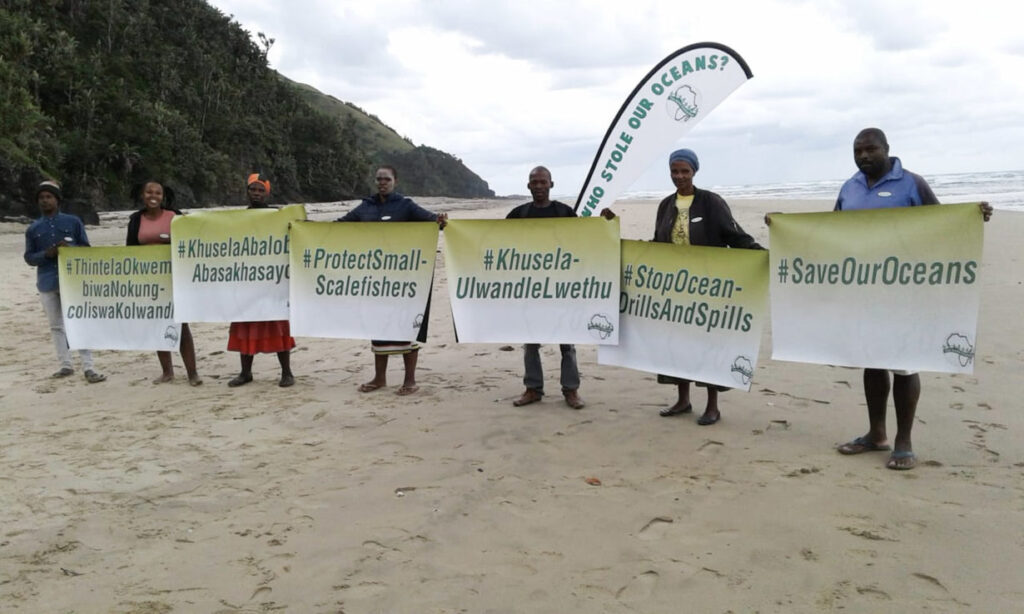 On 24 June 2021, the Green Connection – along with other environmental justice groups and the coastal communities, celebrate an unexpected victory. Civil society groups have been alleging that the Environmental Impact Assessment (EIA) processes were flawed, and today, the Department of Forestry, Fisheries and Environment made public its decision to refuse all three environmental authorisations applications (EA) for the gas-to-power projects proposed for the ports of Richards Bay, Ngqura and Saldanha Bay.

The Green Connection’s Strategic Lead Liziwe McDaid says, “We are incredibly happy about this decision, which supports our views that the concerns of local affected communities should be properly taken into account and their issues properly studied. And we hope that the DFFE will, going forward, always make the effort to continue to check that all the relevant information is presented in EIAs – especially for those projects that will have a high impact – and hold consultants accountable for anything less.”

Neville van Rooy, the Green Connection’s Community Outreach Coordinator says, “We do not believe that Karpowerships were right for South Africa’s energy mix. These floating kettles would certainly have had a huge impact on the lives of the many small-scale fishing communities along the coast who depend on the oceans for their very existence. This process appeared flawed from the start, since many of these communities were neither recognised nor considered. This is a good day for our democracy.”

Natalie-Jane van Wyk of Coastal Links, Saldanha Bay Community echoed McDaid’s sentiments. She says, “We are all just so thankful to the Green Connection for their amazing efforts and the work they put in to help us as small-scale fishers in Saldanha to turn this fight into a victory. Our fishers can continue to work in our zone and continue to provide for our families, which is actually the biggest victory.”

Solene Smith, Chairperson of the Fishers of Langebaan was particularly moved by the decision. “I am truly overjoyed by the outcome. This victory is concrete evidence that united we are strong. By joining forces with environmental organisations and other coastal communities affected by these proposals, and by making our struggles public – through our protest actions and talking to the media,” says Smith.

She adds, “I think back to our demonstrations on World Oceans Day recently, how the young and old in the community joined hands to bring awareness to importance of conserving our Langebaan Lagoon and the ocean. This is about securing the environment for future generations. Our voices will continue to be heard more and more from this day forward, because we are the custodians of our environment. We were born here. We live here, and we have our customary right to fish in these waters. And it’s not just the issue of Karpowerships that we will fight against, any issue that threatens our environment and our oceans will be handled in the same manner with community unity and passion.”

Mr Christy Links, a fisher in Saldanha Bay also welcomed the announcement and called on the government to listen to the concerns of the community. “I would like to thank our community and all who supported us. This decision proves that unity was our strength in this fight, and I implore the government to acknowledge and value community input regarding future projects of this nature.”

The Eastern Cape Environmental Network’s (ECEN) Owen Ndidi says that as they have also been advocating for transparency and a fair public participation process, the government’s decision is welcome.

“We will however continue to watch the energy space as things unfolds in the future, because there are still a number of issues that remain unclear, one of them being the call from civil society for parliamentary hearings around the Risk Mitigation Independent Power Producers Procurement Programme (RMIPPPP), and specifically the choice to award preferred bidder status to Karpowership”.

Ntsindiso Nongcavu from Port St. John’s Coastal Links says, “I am grateful that Minister Creecy has suspended everything to do with Karpowerships and put the conservation of our environment first. However, while the suspension is a win for the comrades, it does not mean that we can rest because, as I understand it, the Karpowerships company can still challenge this in court. This means that it is not over, yet. So, let us continue fighting!

“For us, a major concern is that government’s plan, Operation Phakisa gives rights and power to commercial fishers and even oil and gas companies, over the rights of small-scale fishers. We are not really considered or recognised as key and valuable stakeholders. That is why we need to stand together as small-scale fishers – from Saldanha to Gqeberha, and even further in KwaZulu-Natal and the Northern Cape – and other partners, so that we can face this problem, together,” Nongcavu concludes.