Hundreds of people from fishing communities near Langebaan and Saldanha on the Cape’s West Coast took to Friday Island Beach on World Oceans Day (8 June), to “Say No to Karpowerships”. The protesters turned up in droves to demonstrate their rejection of the government’s plans to allow the so-called Karpowerships to anchor offshore, proposed to assist the government’s power supply management of the area.

In further actions around the country, fishing communities in Eastern Cape also did a beach clean-up at Umngazi Beach, calling attention to the need to make ocean protection more of a priority. And the Green Connection team were on the coast of Northern Cape to support these communities who face the threat of a potential exploration in Block 1, which is located offshore extending from Alexander Bay to approximately Hondeklip Bay.

Neville van Rooy, Community Outreach Coordinator for the Green Connection, says the environmental justice organisation supports the protesters 100%. “The theme for this year’s World Ocean’s Day ‘The Ocean: Life and Livelihoods’ could not be more appropriate, since the South African government seems hellbent on destroying our oceans with oil and gas drilling, and Karpowerships. These are all massive threats to the livelihoods of small-scale fishing communities, who have depended on the ocean for generations.” 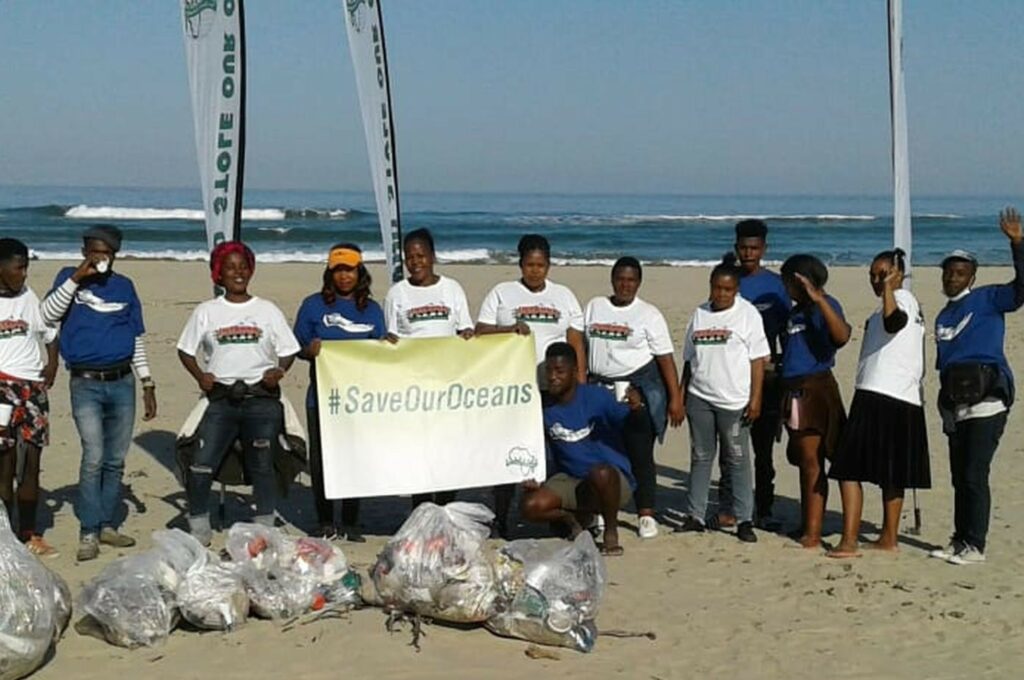 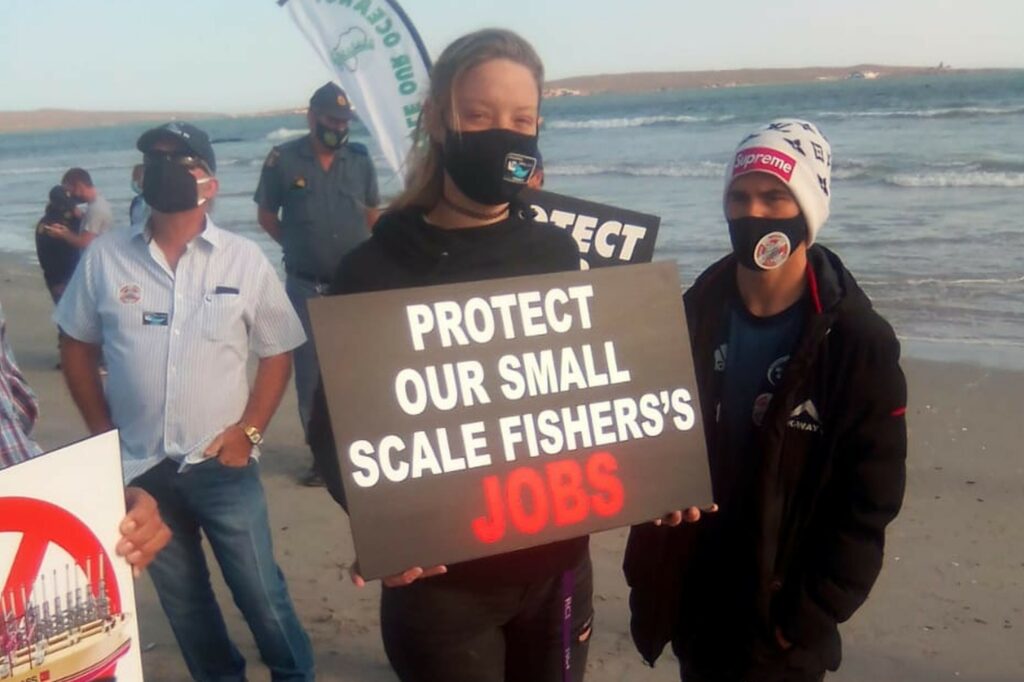 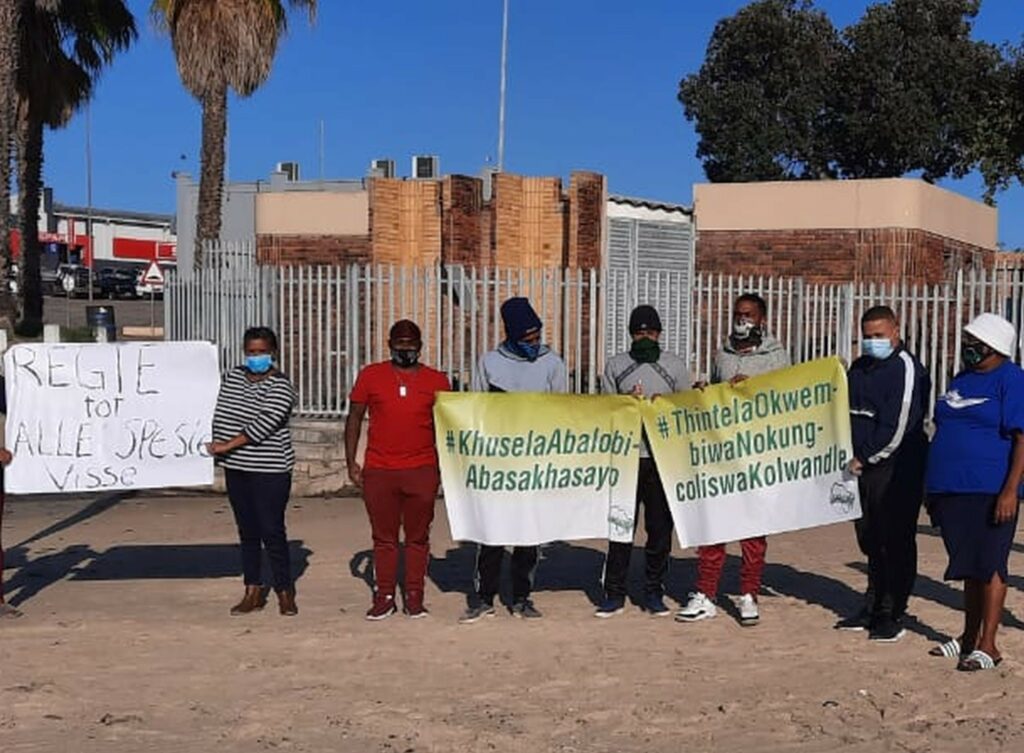 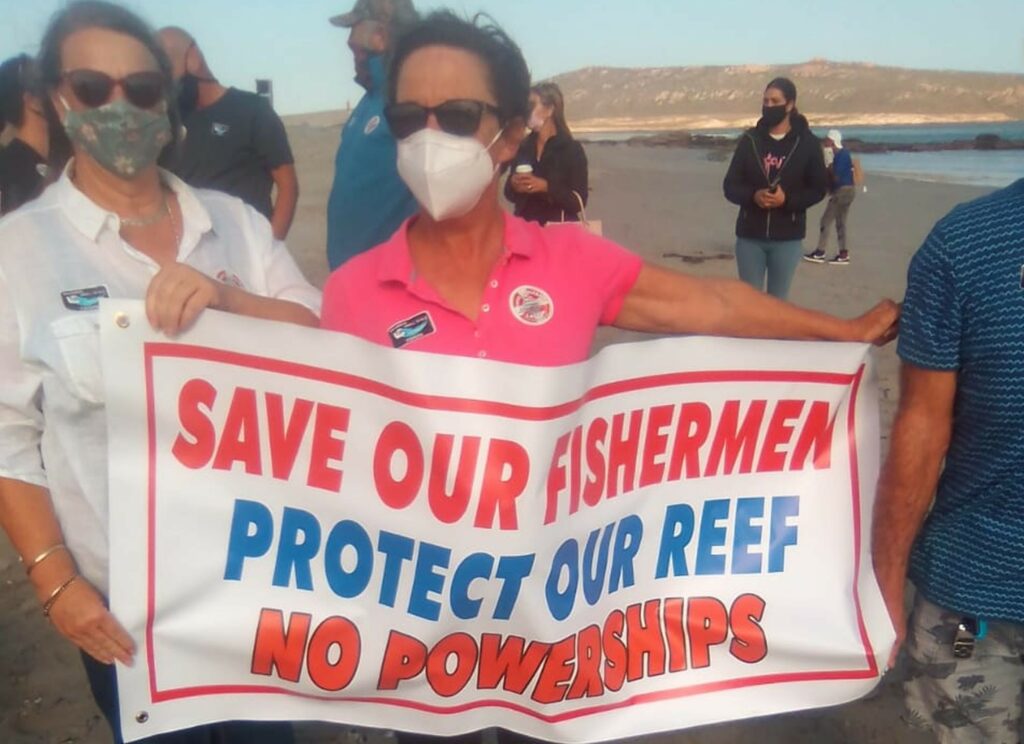 Youth protester Natalie-Jane van Wyk from Saldanha Coastal Links says, “Today’s demonstration was to make the issue known to the rest of South Africa. Karpowerships is a problem for our local fishers, and we do not want them here. Our fishers depend and survive on our oceans and the Karpowerships will drive the fish away and result in our local communities falling deeper into poverty.” She added that it was important to celebrate World Ocean Day as it was the “one day where people could give back to the ocean for getting so much from it.”

Carmelita Mostert, also from Saldanha Coastal Links said the protest went very well. “It was a privilege for us to clean our beaches today and to celebrate World Ocean Day in this way. Also, to draw attention to the Karpowership issue. We don’t want Karpowerships here, and the reasons are quite simple, we depend on the fish for our very existence. Without the fish how will we put food on the table? How will the fishers get work, how will they keep their children in school?”

Another protester, Solene Smith from Langebaan Coastal Links, called on the government to include communities in their decision making. “We are the users of the oceans, as indigenous and traditional fishers we know and depend on the oceans to stay alive. The ocean is in our blood, and it is important to celebrate World Ocean Day so that the younger generations remain a part of it. This motivated many of our youth to join our protest today. Regarding Karpowerships, I do not understand why the government must use gas and resources from Turkey, and why the solution must be ocean-based. Why can’t we use South African resources and why can’t it be done on land?”

Other protesters echoed the call for a move to renewable energy sources instead relying on fossil fuels which continue to threaten the environment and climate.

Further afield, in the Western Cape, small-scale fisher communities in Knysna also took action by cleaning a local beach and showing support to local fishers. Barend Fredericks from Knysna says, “Our team heard the plight of the ocean and the aqua marine life, therefore we do what we must to preserve our precious natural resource. I have been on a mission to educate tourists here in our area, sharing our mission and vision and also some of the issues we face, such as the need for equality in fishing rights and protection against unlawful acts by private citizens in our community. When the community stands together, we can make a change. Our ocean is our life source.”

Fredericks says that he also emphasized that pollution in our oceans will deteriorate the precious species in the lagoon area, as the World Wildlife Fund marked the Knysna sea horse as an endangered and protected species.

In the Eastern Cape, Ntsindiso Ncgavu with Coastal Links Port St. John’s says, “The people of Port St. John’s understand the importance of the ocean and that destroying it, will have far-reaching consequences. It is home not only to fish and other marine animals but is also a habitat for coastal flora. We know that we need the ocean, not only for the livelihoods and employment opportunities it provides, but it also helps clean the air to provide oxygen and plays in important role in cooling the atmosphere.”

He says, “With the beach clean-up we did on World Ocean’s Day, we want to draw attention to Section 24B of the Bill of Rights which says that everyone has a right to an environment that is not harmful to our wellbeing, and that includes the ocean. Government and the companies who want to drill up the ocean for oil and gas must respect those rights, as it is enshrined in the Constitution.”

“We are also against the proposed Karpowerships. These ships are also a risk to our environment.

Without a healthy and clean ocean, we will not be able to catch fish and support our families. Those who make crafts using materials from the oceans, will also be affected. We cannot agree with any projects that will take our jobs away from us,” concludes Ncgavu.

Phumza Kalimashe, also from Port St John’s says, “We are cleaning up Umngazi Beach as the youth because, as coastal communities, we want to emphasize that our oceans must be protected at all costs. Littering should be condemned because it puts our marine species at risk. As fishers we want and need clean and healthy oceans, for our livelihoods.”

“If we agree to the pollution of oceans that means we are also killing our coastal communities, as they are dependent on the oceans. As I see it, people must value marine species as they value themselves. Let us protect our oceans! We also hope that the government would realize the negative impacts that oil and gas have and how coastal people will be affected. We do not want oil and gas! We hope that other South Africans will join in our fight against oil and gas drilling because we need the ocean to make our living. The money we get from selling fish is used, for example, to take our kids to schools,” says Kalimashe.

Van Rooy adds, “This is why we support the coastal community protests that took place today in the Northern Cape and Saldanha-Langebaan on the West Coast, as well as the efforts in the Eastern Cape, because current government proposals are too much of a threat to our oceans and these communities. The people have rights, and it is The Green Connection’s mission to ensure that the mostly indigenous communities, living along the coast, know exactly what these rights are and how to exercise them.”