Green Connection Calls on Public To Say No To Karpowerships

This Wednesday 31 March is the deadline for the public to comment on Minister of Mineral Resources and Energy Gwede Mantashe’s proposed Gas to Power Powership projects at the Port of Ngqura Eastern Cape and at the Port of Saldanha Bay Western Cape. The Green Connection says there are numerous deficiencies in the Environmental Impact Assessment (EIA), key impacts that have not been considered or factored in. According to the social and environmental justice organisation, this could be devastating for the country’s affected small-scale subsistence fishing communities, whose livelihoods were already dealt a crushing blow when their fishing and other rights were compromised during the pandemic lockdown.

The Green Connection’s Strategic Lead Liziwe McDaid says that while it is important that South Africa urgently resolves its electricity problems – which, as a result of mismanagement and corruption, has led to persistent load shedding, on top of persistent electricity tariff increases – it is important that government makes its decisions based on good, thorough data. She says that the country’s choices should always be in the best interest of the people, the environment, and then the economy.

She says, “Upon inspecting the EIA report with our legal team, we believe that these proposed projects should not be considered nor endorsed. There is too much missing data. Too many negative impacts for South Africans and the environment that have been brushed over and not given the scrutiny it needs to make informed decisions. It is almost as though government does not want to know the full impact of its projects, so that they can go ahead with a ‘clean’ conscience. However, by our assessment, these Karpowerships are not worth the risk, especially not at the expense of our coastal communities. We once again question, as the climate crisis intensifies, why has Minister Mantashe selected these Karpowership companies as preferred bidders for the Risk Mitigation Independent Power Producer Procurement Programme (RMIPPPP), rather than investing in more socially-inclusive renewable energy projects?”

“First of all, projects of this magnitude and with this level of potentially-destructive impacts – in this case, for small-scale subsistence fisherwomen and men living on these coastlines – should not be decided during a time like CoVid. Citizens, especially those who will be affected, cannot be involved in meaningful public participation processes. This part of the EIA should be a proactive process, as it is critical to understanding, first-hand, how projects may impact these largely-indigenous communities. This is usually the point where it becomes clear as to whether the perceived benefits outweigh the costs. Sadly, this is also the most trivialised part of the EIA process and meaningful public participation never seems to be the goal of those pushing these projects, even though they are often the ones with the most to lose,” says McDaid. 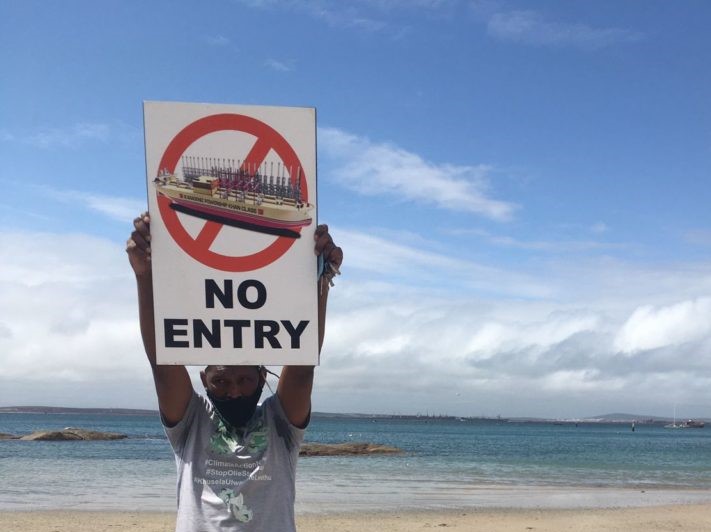 “In addition, the sections that deal with the economic impacts and implications of these projects, fail to acknowledge the various economic exemptions, which lead to these seeming to be viable, in terms of costs. An example is the tax and other incentives afforded to the Coega Special Economic Zone (SEZ), by virtue of it being an SEZ. Then there is also the blanket exemption from complying with a 40% local content stipulation that has been granted to the Powerships. All of these financial breaks for these multinational oil and gas companies will ultimately be funded by taxpayers,” she says.

Another critical gap in the EIA report, according to McDaid, is that it does not indicate the cost of climate change impacts, which is already most keenly felt in sub-Saharan Africa. Cumulatively, the three powerships would emit 54.33 million tons CO2e. The assessment of the no-go option requires a comparison of the economic benefits and disadvantages of the proposed project against the benefits and disadvantages of not proceeding with the project.

“It is troubling that no energy alternatives were provided. This EIA is not feasible if the climate change impacts and costs are not assessed and economically quantified. One of the most likely outcomes of the no-go option would be that the demand for energy would be taken up by development of renewable energy sources such as wind, geothermal energy or solar energy which do not generate greenhouse gas emissions.  The EIA without an assessment of the costs of its greenhouse gas emissions is therefore incomplete.

Furthermore, the draft EIA report fails to clarify the noise levels nor the potential impacts for residents and animals living in the area. In Saldanha, where noise is already a problem (up to 90 decibels), cumulative effects have not been measured, even though residents will have to live with even more noise for a number of decades to come. There is also insufficient information regarding the impacts on marine life. What happens to the effluent from these ships? The EIA indicates that no waste water, from cooling the generators, will be discharged into ocean but it is not clear what will happen to all that hot water?

“In light of these and other significant deficiencies in the Draft EIA report, a proper assessment of the best practicable environmental option is not feasible and any decision to authorise the project will be unlawful. Accordingly, Green Connection calls for the application for environmental authorisation not be granted,” concludes McDaid.