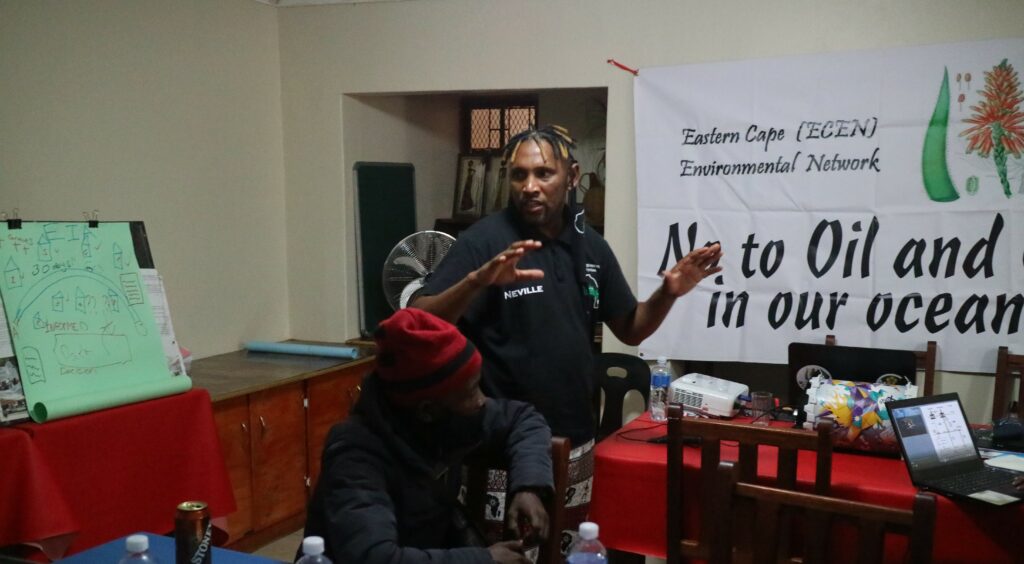 Last Thursday, in the lead-up to Social Justice and Environmental Health Awareness Month (February), the Green Connection kicked-off its #WhoStoleOurOceans campaign for 2021, with the NGO’s Community Outreach Coordinator Neville van Rooy hosting this year’s first community workshop in Port St John’s. Partners from around the Eastern Cape coastal regions also joined. Van Rooy says that the workshop series is geared at empowering fishing communities to be more actively involved in the Environmental Impact Assessments (EIAs) processes for projects that are likely to affect them, and will be offered in coastal regions around the country, throughout the year.

According to Van Rooy, who collaborates with coastal communities and small-scale fishers in all four coastal provinces, “The Green Connection is determined to share the information that communities need to ensure that they can contribute to decisions, when it comes to mining or anything related to oil and gas issues in the ocean. Last year, when we first started reaching out to fishing communities –from Port St John’s in the Eastern Cape, and Mossel Bay and the West Coast region in the Western Cape, all the way up to Port Nolloth in the Northern Cape – we were shocked to discover how poorly informed people were about activities proposed right on their doorstep.”

“We rely heavily on the National Environmental Management Act (NEMA) to inform our approach to community education. First, we communicate with communities to understand what they know about plans for big projects in their area, and also what they understand the project to entail. Once these gaps regarding any relevant project proposals and active EIAs they should know about are filled, we empower these communities with the information and tools they need to be better equipped to protect themselves and the ocean they depend on,” says van Rooy.

According to the NEMA, meaningful public participation is not only important to avoid harm to people and the environment, it is a legal requirement. But, everywhere we go, we find that these fishing communities are unaware that there are oil and gas, or mining projects in the pipeline. As a result, in most cases, there is an absence of meaningful consultation with communities. This is key to our work at the Green Connection because if they do not know about proposed projects and associated EIAs, how would they be able to participate?

Throughout the country, van Rooy says, there is a massive call from citizens, to government and the companies involved, that they want to be more involved in the big decisions that could harm them and their environment. There are so many EIAs currently underway that will affect these coastal communities, but the people do not have any information about what’s happening.

“As we share our experiences and learnings, we can help empower more #oceandefenders who are equipped and able to defend their livelihoods because their lives, #FishersLivesMatter,” says van Rooy.

According to Zukisa Mankabane from Port Elizabeth in the Nelson Mandela Bay region, “The people most affected by these processes, especially if it is not done in a proper way, are the poor, the unemployed, and the so-called in-trade people – the most vulnerable groups of all – who do not have access to platforms like Zoom, let alone means and tools to operate. Many of us do not have laptops or smart phones, and even getting data is a struggle. Especially during this lockdown period, many people are deprived of their right to participate in EIA processes.”

A member of the Eastern Cape Environment Network (ECEN), Mankabane adds, “In my view, this process should be stopped under this lockdown period. And, when they are ready to start up again, should use public broadcasters to publicise the meetings because most of us listen to the local radio stations here. As a result of CoVid, the process thus far has not been fair, and the people who are most affected, are the ones who do not have an opportunity to be involved. The impact of poorly-conducted EIA processes results in disaster.”

Ntsindiso Nongcavu from Port St. John’s Coastal Links says, “The EIA is meant to be an overall and complete assessment of all the potential impacts of a proposed project. It should consider how a project could affect the people, their livelihoods and wellbeing, as well as the environment. This usually involves many complicated technical reports, which we may not understand, and from which the decisions are ultimately made. Yet, no effort is made, by government or the companies involved, to ensure that we understand all the implications of their proposed projects. They only tell us the good things, and leave out the bad.”

Nongcavu adds, “We are grateful to organisations like the Green Connection, who make the time and effort to ensure that we are better informed and able to participate in these processes. In our communities, there is a desire know more because, as the people who depend on a healthy environment to live, and are the ones who have to suffer the effects of climate change and damage, we want to protect ourselves and the environment.”